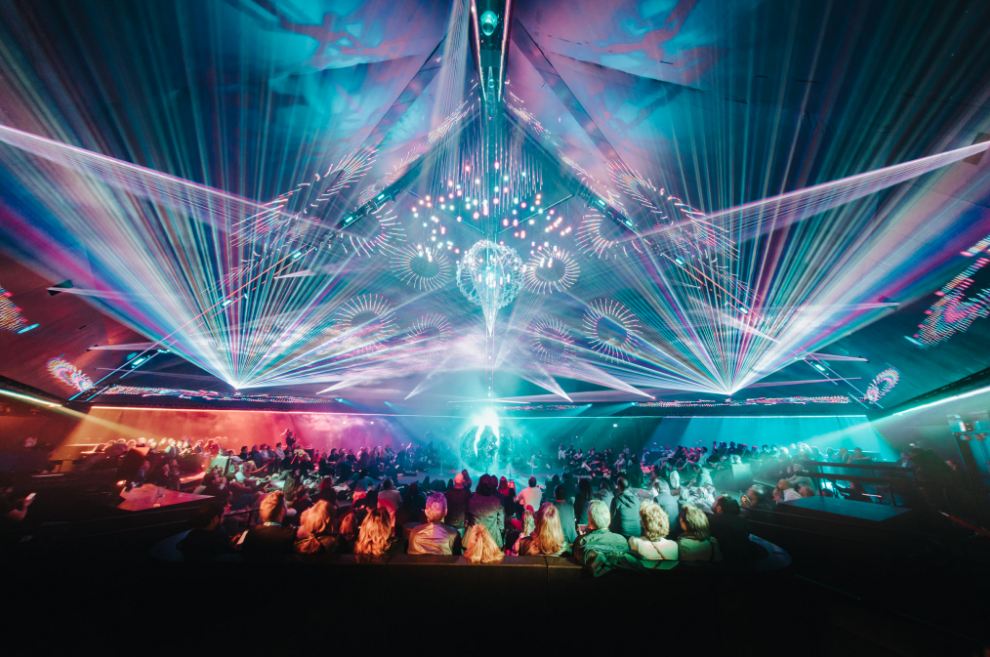 Montreal — the Canadian city that spawned the global juggernaut Cirque du Soleil — has once again reimagined the circus, this time tapping into the rich animation and video game production talent found in the Quebec metropolis.

In the old port district, between a giant bridge over the Saint Lawrence river and a Ferris wheel, two strange white pyramids sprouted up this summer — an edgy 21st century big top.

They are part of the latest act from Guy Laliberte, the founder of the venerable Cirque du Soleil who, after selling his company to Chinese and American investors in 2015, started a new venture: Lune Rouge (Red Moon).

That company is behind the strange pyramids of PY1, a show that blends acrobatics and multimedia flair with vibrant sounds, lasers, 360-degree projections and special effects.

“Montreal is undeniably the circus capital of the world, but is also becoming known as a hub for creative entertainment,” says Lune Rouge’s artistic director Jean Guibert.

Its first show, “Through the Echoes,” tells audience members in a jam-packed 60 minutes “the story of the creation of the universe up to now,” according to Guibert, a Frenchman who came to Canada in the early 2000s to work for Cirque.

The interior of the main big top is turned into a giant four-sided screen, where abstract images are projected, accompanied by a voiceover about our collective cosmic history to an electro-pop soundtrack.

Beyond the actual show, the PY1 venue is transformed on some nights into a massive futuristic dance club. In the morning, it’s used as a huge yoga studio.

In the fall, the 600-seat white pyramids will be moved from Montreal to Miami, where augmented reality glasses will be handed out to showgoers to watch virtual actors and acrobats leap off the screens.

Montreal, a city of four million, boasts an eye-popping 140 video game studios, including a branch of one of the world’s largest, Ubisoft.

“We are looking to tap into the expertise of video game makers and others as we begin to break barriers between the worlds of showbiz, circus arts, theater and video games, and merge these disciplines to create new forms of entertainment,” Guibert told AFP.

The city hosts several annual major cultural events such as the annual Montreal Jazz Festival and comedy festival Just For Laughs, attracting scores of entertainers who, according to Guibert, have helped turn it into “a world center of expertise in creativity but also in production.”

For Nadine Marchand, director of the Montreal Cirque Festival, which grew out of the global success of Cirque du Soleil, many circus companies are now mixing elements of dance, visual arts and music into their shows.

Guibert says that added to these elements is “technology which allows us to cross-breed various forms of entertainment and continue to surprise people.”

Bosch Dreams, which was showcased at the Montreal Cirque Festival in July, has also sought to blend technology, theater and circus arts.

Written and directed by the Montreal artist collective The 7 Fingers, it delves into the world of Dutch painter Hieronymus Bosch, bringing to life his best-known paintings through digital animations on a giant screen, interspersed with performances by acrobats.

Montreal’s National Circus School has also been pumping out highly-skilled acrobats since its founding in 1981, noted Anthony Venisse, who also produced a show for the street festival this year.

“The National Circus School has placed a lot of focus on technique… and that bolsters graduates’ artistic abilities,” Venisse said.

Marchand noted: “These artists who could have gone into theater or dance have instead opted to join the circus,” thanks to the wealth of “inventiveness.”