You have 13 minutes to complete all tasks and get away

Ready to venture deep into the swamp to find what danger is lurking there? Using the weapons on the raft, and your wits, it’s up to you and your friends to defend the swamp against an infestation of supernatural aliens. With enemies emerging from the shoreline, the water, and the sky, it’ll take cooperation and teamwork to make it through the swamp and defeat the Kraken safely. Beware! Don’t let your raft catch on fire! Use the fire extinguishers to protect the raft!

Up to four players can engage with a challenging puzzle game in a race against the clock. You begin in a group lobby where all players can see and interact with one-another, get familiar with the tools equipped to the back of your hands and the space everyone is playing in. Each player has their own identifying color, one red, blue, green, and yellow. Each player gets two tools to use, and part of the puzzles is figuring out the function of each! On the surface this appears obvious; you have an expandable shield on the left hand that is able to reflect the second tool, on your right hand, an expandable energy sword. Players can experiment with these on each other and themselves to assist with identifying the function of each tool.

Walk around completely free. No teleporting. No wires. Loads of fun

You have 10 minutes to complete all tasks and get away 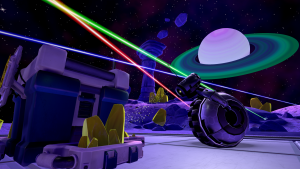 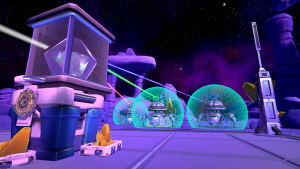 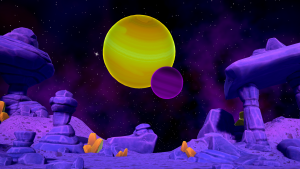 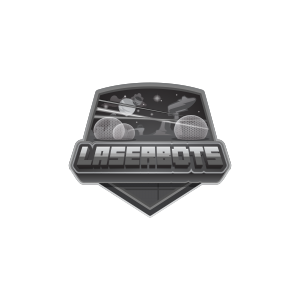 Once players have been given a short introduction to VR in the game lobby, they are inserted into the game world. Immediately players find themselves standing in a massive flatland on a foreign planet. The stars, nearby planets, and looming asteroid belts are all clearly visible in the sky.

The objective of the game is to survive on onslaught of robotic drones deployed by an enormous, slowly approaching roller drone while an evacuation shuttle is incoming.

You have to solve a series of increasingly complex puzzles while simultaneously protecting and gathering golden crystals from the droids to power a defensive turret that can halt the approaching drone. If players work together they may be able to destroy the smaller crystal stealing drones while using the shield to reflect colored lasers from larger stationary drones.

As the rounds progress the large drone deploys a new minion to harass you, an agile enemy that flies and fires seeking missiles at you or the crystals on the turret charging station.

These missiles are slow and easy to track and can be cut using the energy sword on your right hand in the same fashion as the small roller droids. As players progress through the game they may find themselves running out of time, leaving them to be slowly flattened by a giant wheel.

The alternative is that they successfully halt the drone’s progress with the defense turret in time for the evac shuttle to arrive. If the player successfully complete the game they are returned to the game lobby with congratulatory music and a page detailing who performed best in various tasks.

MADE BY VR CAVE

There are no reviews yet.